Yes, she is elegant and charming to be sure. But the 42 year old Beijing woman some call "The Dragon Lady", "Wicked Witch of the East", and others "Scum" has been ripping off foreign teachers in China since 2005! This 8 year longevity is no longer a mystery as an insider from China ESL has been supplying the dirt on her in recent days.  But first you need to understand WHY people hate her so much. Because a photo is worth more than a thousand words, just look at this contract and emails Rebecca had with one of over 2,000 expat teacher victims (American Teacher Katherine Cox)

As you will see in this contract, Rebecca Tang not only collects 66% of a teacher's salary, but also makes them pay for both invitation and release letters - something Chinese law obligates her to do for free - as a requirement of law.  Further she instructs foreign teachers to violate the law by coming to work in China on an F or L visa, which if caught will get the teacher fined, deported, and banned from reentering china for up to 5 years. See below chart that we swiped from the CFTU website. 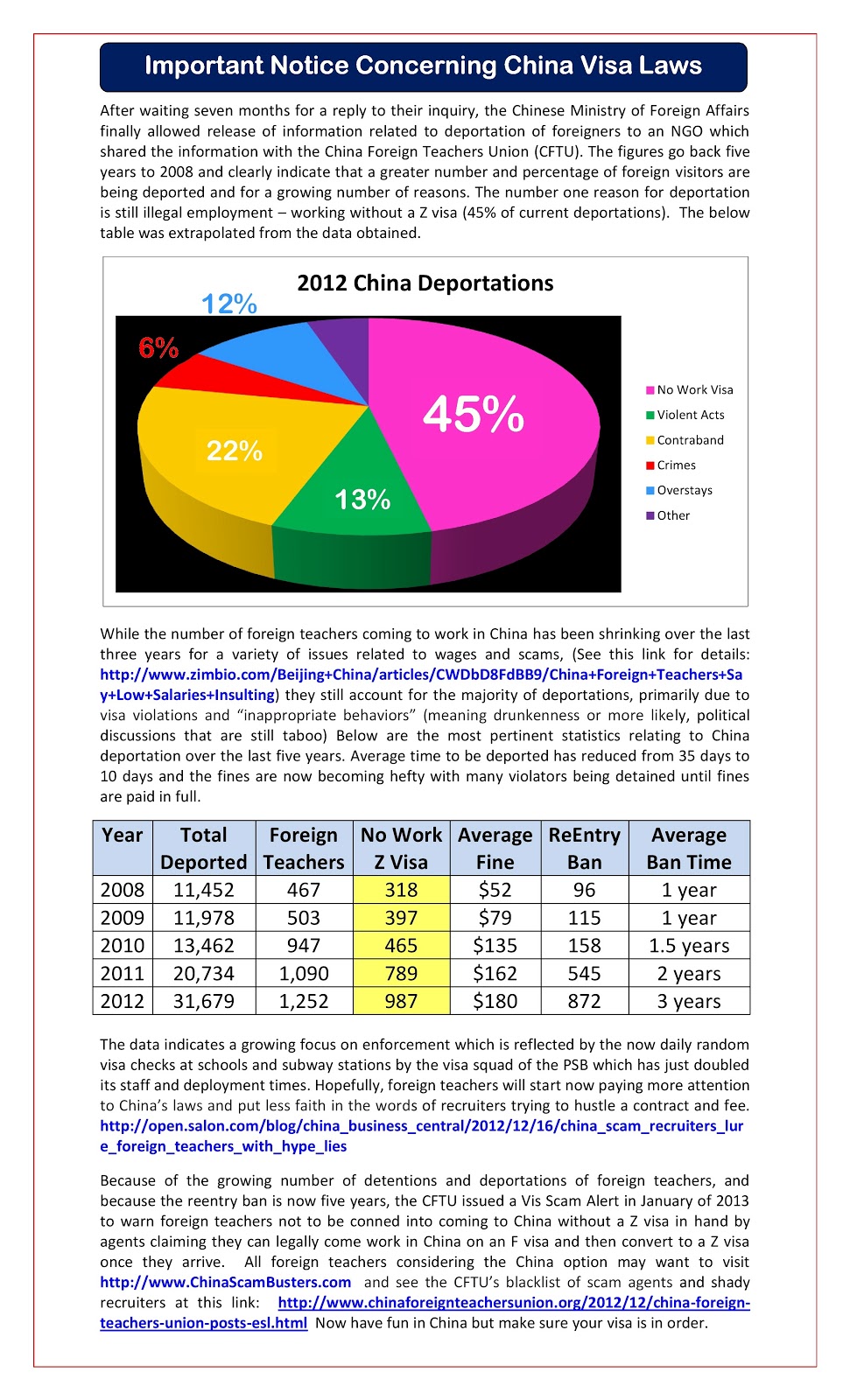 Also note in her CHINA ESL contract that Rebecca threatens teachers with being "blacklisted" and "deported" if teachers make complaints or problems for her, or disobey her contract!   You can read more about this blacklist at:
http://www.chinaforeignteachersunion.com/2013/04/china-foreign-teachers-union-obtains.html
So how does she get away with this crap for 8 years? Well she has had numerous affairs and business "cooperation" with the right people including the former Police Chief of Beijing and many foreigners like Craig Hill (Editor of China Daily Mail blog) who recruit foreigners to birddog and run interference for her when the heat is on.  These links will give you an idea og how she works:
http://www.thebeijinger.com/forum/2013/01/31/beware-chinaesl-scam-alert-rebecca-tang-will-rip-you
http://eslwatch.info/china-2/bad-recruiters-review-in-china/7150-webb-international
http://chinascampatrol.wordpress.com/2013/04/05/is-the-china-daily-post-and-editor-craig-hill-a-shill-scam/
http://forums.eslcafe.com/teacher/viewtopic.php?p=45560
http://www.thebeijinger.com/node/1592803
There are unconfirmed rumors from a former China ESL employee that Rebecca, who is now a multi-millionaire (she owns 6 companies and 8 apartments in Beijing & Shanghai) was arrested twice - once recently and once in 2008.  Supposedly she bought herself out of her legal jams with bribes. Of course it would be great if we can prove this, but we can't. However those who live and work in China know that this is the standard modus operandi of China cheaters. So all we can do for now is stand on the mountain top like others have also done and scream out at the top of our lungs...
BEWARE  OF  REBECCA  TANG
&  THE  CHINA  ESL  SCAM!﻿
﻿
﻿
Posted by Unknown at 16:06